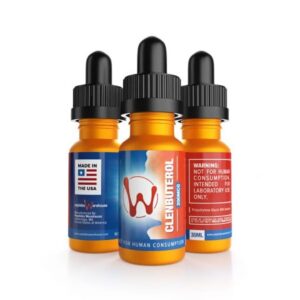 Clenbuterol is a beta-agonist that was originally developed for veterinary use. However, its anabolic power quickly made it a very popular steroid among athletes, especially those wishing to burn their fat during rest periods. In this blog, Clenbuterol results we present the main reason for the use and effects of Clenbuterol. Plus, the risks it poses for your health.

Clenbuterol Cycle – What is it Used For?

Clenbuterol was originally a treatment intended to treat horses, suffering from lung diseases. It is still used in the veterinary industry today. In some countries where it is legal, it is used as a treatment for asthma and breathing difficulties.

Clenbuterol was also developed to treat cardiovascular disease in animals. This means that it will dilate blood vessels and consequently support the flow of blood throughout the body. A factor needed to increase muscle congestion. Studies suggest, however, that this effect may subside over time. To avoid this, athletes stack clenbuterol with antihistamines which will avoid saturating the receptors.

It is however mainly used by athletes wishing to boost their physical performance. Indeed, Clenbuterol bodybuilding practices are popular in the sporting environment but nevertheless are illegal. The fact it increases muscle and strength makes it extremely popular in this field. It has also gained popularity among professional athletes seeking an alternative to steroids that are too easily detectable during doping tests. Since then tests carried out before the sports competitions have been adapted. Especially since many famous sportspeople have been tested positive.

In addition to building muscle-mass Clenbuterol has fat-burning properties. There are cases among Hollywood stars, who have discovered Clenbuterol as a very effective way to shed excess pounds, without making too much effort.

What are the effects of Clenbuterol?

As it is now used as a fat burner particularly by athletes the job is relatively simple. Clen will stimulate the beta-2 receptors, and therefore speed up the metabolism. As a result, when taken Clenbuterol, it raises the body temperature (due to the stimulation of beta cells). These produce more heat, which will encourage the body to draw on fat reserves to produce energy. In some people, it will have an appetite suppressant effect. Which means it can artificially increase your feeling of fullness. And force a person to reduce food portions. But it depends on the individual as for others the appetite suppressant effect will be completely nonexistent!

How to take Clenbuterol

Clenbuterol is largely (and illegally) used by bodybuilders during the rest phase looking to lose fat, as it can lead to muscle wasting. The drug Clenbuterol avoids this thanks to its anabolic effects, coupled with a fat-burning action. Clenbuterol is liked by athletes for its anabolic effect. It will help counter the risks of muscle catabolism (or the destruction of the cells of your muscle tissue) which are stronger during dry periods.

Even though it cannot be considered a steroid, clenbuterol provides an increase in muscle mass, in a similar way. However, this will require a substantial calorific intake, and in particular one rich in protein to benefit from the effects of protein synthesis.

What are the risks of taking Clen?

Keep in mind that this is a veterinary treatment, not intended for humans. It will, therefore, cause very unpleasant side effects in people who take it, especially over a long period. Side Effects with Clenbuterol Results include:

Generally speaking, Clenbuterol is a stimulant (just like coffee). By speeding up the body’s metabolism, it may, therefore, disturb the sleep patterns. Especially since it stays in the blood between 24 and 26 hours and is particularly slow to get rid of. While some athletes will have better abilities to eliminate it and can take Clen in the morning without feeling a negative impact on sleep, it is a dangerous product for people prone to insomnia. Also, it is not advisable to combine it with the consumption of alcohol and caffeine.

However, the laboratories have succeeded in manufacturing legal substitutes, reproducing the positive effects of Clenbuterol while avoiding the risks.

Review of Clenbuterol Cycle for Beginners

Many studies have also highlighted the impact of this drug on the destruction of the heart cells. Logically, it increases the risk of stroke and heart problems. However, this research was carried out on subjects taking a high Clenbuterol cycle dosage (often 2 to 3 times more than the dosages recommended by specialists). But a lower dosage can also be harmful to your heart. It is therefore strongly discouraged taking Clenbuterol. If used long-term it will put you at risk with your heart health. And many athletes taking clenbuterol were eventually hospitalized.

The impact of Clenbuterol on potassium levels

Clenbuterol can also deprive the body of potassium. In fact, taking large quantities of this anabolic can cause significant loss of potassium and taurine. However, potassium is crucial to promote muscle contraction (which will allow an increase in muscle mass) and a properly functioning heart. This points to why it is extremely harmful to take.

Effects on the heart and blood pressure

The other risk that Clenbuterol results in is to increase in blood pressure over a long period. Other dangers of this anabolic include the prevalence of tachycardia, cardiac arrhythmia, enlarged left ventricle (LVH) and muscle cramps. Suffice to say that athletes with a history of heart or brain problems should not take clenbuterol. A cycle too long of this product can go so far as to harden the walls of the muscles and have a harmful impact on the heart, in an irreversible way.

Clenbutrol mimics the thermogenic properties of Clenbuterol. So it helps burn fat and better transport oxygen to the muscles. Results will control and sculpt muscle mass, without taking any risk on the cardiovascular level (the main drawback). By increasing body temperature, Clenbutrol also boosts the metabolism and uses fat reserves to boost energy levels. This, therefore, increases the amplitude and intensity of your training without any problem.

The benefits of Clenbutrol

Clenbuterol will allow an increase in muscle and fat ratio and preserve lean muscle mass (with visible results after 30 days). But it will not be a health risk and in particular for the heart liver and kidneys compared with conventional steroids.

The chemical Clenbutrol is indeed the legal substitute for research centers and laboratories. Marketed by the online shop Peptides USA Clenbuterol for sale is for professionals!