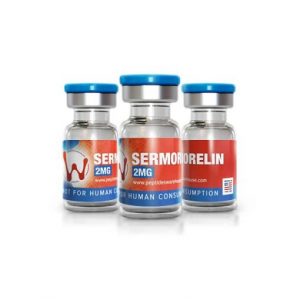 In this blog “Sermorelin Reviews 2020” we look at various facts of the research chemical. Plus, whether this research chemical has progressed since its creation. Firstly Sermorelin is classed as a Growth Hormone Releasing Factor (1-29) or GRF (1-29) for short. It is a synthetic peptide that belongs to the group of growth hormone-releasing hormones (Growth Hormone Releasing Hormones, or GHRH for short). GRF (1-29) consists of only 29 amino acids of the 44 amino acid structure of GHRH.

The History of Sermorelin Studies

GRF (1-29) was developed in the 1980s. In the USA, it is also known under the active ingredient name Sermorelin. Unlike all other known GHRH, GRF (1-29) had been in use since 1997 in the USA. It was used as an approved drug that was used in small children and in anti-aging therapy. Until a few years ago it was produced by Serono under the brand name Geref and sold in the USA until they stopped sales of it in 2008. According to official information, it was due to a lack of raw materials. But, the real story was the potential for abuse, especially in dishonest anti-aging institutes. Sermorelin is currently only available only as a generic in the USA.

Is Sermorelin Worth it for a Bodybuilder?

As with many research peptides they tend to be popular in the fitness industry due to their results. However, the problem with GRF (1-29) is its extremely short half-life of 5-10 minutes, which is simply unattractive for bodybuilders compared to, for example, the modified GRF (1-29) with a half-life of about 30 minutes is. GRF (1-29) binds well to the receptors of the pituitary gland, but is very quickly broken down and deactivated by enzymes in the blood. Modified GRF (1-29) with a half-life of 30 minutes has much more time to circulate in the blood and to look for suitable receptors for docking.

GRF (1-29) was usually injected at a dose of 200mcg one hour before training. A second injection then took place shortly before bedtime in a dosage of 300mcg. Those who used GRF (1-29) usually also used a GHRP, such as GHRP2 or Ipamorelin, so that the effect does not weaken completely. It was prescribed for the duration of 10-12 weeks.

An Update on Sermorelin Reviews Bodybuilding

In practice, GRF (1-29) is basically no longer as popular as it once was. Only not so well-informed athletes and those who cannot get any other GHRH still use this active ingredient. Side effects caused by this peptide GRF (1-29) are very mild. For the most part, the usual reactions to the injection are mentioned, such as short-term flashes (flushing), dizziness, and headache. Long-term side effects, of course, all side effects of an increased growth hormone and IGF-1 levels are possible.

We would like to point out that many of these research chemicals are still being tested and not for human consumption. They are banned by the WADA or the World’s Anti-Doping Agency in all competitive sports.

As we age the body generally releases fewer hormones. This means it can be hard to maintain a healthy weight, mind and it can reduce energy. Replacing hormones with man-made compounds such as Sermorelin can help dramatically improve metabolism, boost weight loss and increase energy and encourage new cells and tissues in the human brain! In anti-aging actions, HGH or human growth hormones are essential for controlling these issues.

This information in Sermorelin reviews 2020 is relevant to keep up to date on how some research chemicals work. If you are in the research industry make sure you buy from a trusted source. When it comes to peptides you want the best quality to do your job.

Follow us
Category: Articles
Tags: sermorelin and eating, sermorelin review reddit, sermorelin reviews 2019
Blog Search
Recent Posts
All products on this site are for In-Vitro Research, Development use only. Products are Not for Human consumption of any kind.