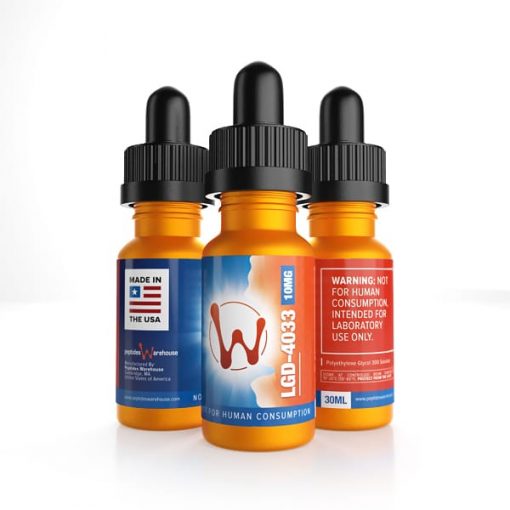 In this guide, we look at the effect of SARM LGD-4033 dosage and delve into various studies that have taken place and logged the results. LGD 4033 is classed as a research chemical and like all of the members of the SARMs group are still being studied and not for human consumption. But, studies have shown them to have some positivity in treating various health problems. Want to know more then read on…

LGD-4033 is also known as Ligandrol. It is a relatively new developed, orally consumable and non-steroid SARM. SARM or selective androgen receptor modulators bind easily and the ability to focus on the androgen receptors. This research chemical was originally developed to reduce muscle wastage, which increases dramatically in cancer patients through radiation and chemotherapy. It was also used against the spread of muscle loss in acute and chronically ill people. In addition to these two uses, it is also used worldwide to curb muscle age-related shrinkage.

SARM LGD4033 raises expectations by producing the same therapeutic advantages as testosterone, only with improved safety and increased tolerance due to the tissue-selective mechanism of action and greater patient acceptance compared to conventional testosterone simply because it acts as a prohormone rather than an anabolic steroid becomes.

Those who have used LGD-4033 will have experienced increased muscle activity, improved anti-resorptive and build-up activity in the bones. It also has a more robust selectivity of the muscles and bones against prostate and sebaceous gland diseases.

A phase 1 study in healthy subjects was recently completed were randomly selected, double-blind and placebo-controlled led to the following result. It showed that doses of up to a maximum of 22 mg per day can be taken without any noteworthy side effects.

The age of LGD is much newer at 3-5 years than that of most comparable preparations available on the research market. This indicates unexplored territory and maybe potential danger. So far, LDG-4033 has undergone several different new studies. From these experiments, the results showed an increase in lean body mass and a decrease in body fat. Furthermore, it indicates an increase in well-being, an increase in strength and improved physical regeneration among users.

LGD4033 is possibly the SARM that has achieved the best results in muscle growth and general weight gain. The increase in muscle or mass is strongly dependent on the food supplied to the body. If the calorie intake is increased using LGD, the body gains a significant amount of mass within 8 weeks. Differences to testosterone are that it is not a steroid anabolic, but it is a prohormone that is able to massively and specifically support the building of fat-free muscles. The liver toxicity of the oral SARM is significantly lower than that of the previously commercially available oral testosterone preparations.

Taking lgd4033 has so far not resulted in any side effects or complications worth mentioning for any of the users. So far, water retention, weak acne or high blood pressure has only occurred in isolated cases. Due to the novelty of the SARM, nothing can be reported about the long-term consequences of regular use.

To maintain physical integrity where possible, the following must be observed when dosing:

Further Studies of LGD-4033 before and after

The SARM LGD-4033 appeared on the scene later and completed phase I of the clinical trials, LGC-4033 proved to be well tolerated and showed no serious undesirable side effects in the test subjects. In terms of anabolic effectiveness, LGD-4033 demonstrated an impressive effect. For example, there was a significant increase in muscle mass and strength in a short period of time. LGD-4033 has been a success in every respect and there have been numerous positive user reviews since this active ingredient was launched on the peptide market.

In order to get a better overview of the effects of LGD-4033, let’s take a look at the highlights of the first round of clinical examinations. Eight male subjects participated in the study (six of whom received the active ingredient and two received placebo) and each subject received a different dose of LGD-4033. The doses administered were 0.1 mg, 1 mg, 5 mg, 10 mg, 15 mg and 22 mg per day. The test period was 2 weeks during which safety and tolerability were assessed.

In such a test, the effects of anabolic-androgenic steroids on cardiovascular health markers such as hematocrit value, blood pressure, hemoglobin and blood lipid levels are critical. After all, everyone wants to maintain good cardiovascular health. However, anabolic androgenic steroids often cause an increase in all of these markers. This is precisely why the development of SARMs is a priority for scientists.

Fortunately, LGD-4033 passed this test with flying colors and even with a high dose lgd 4033. The studies show that there are no changes in blood pressure, hemoglobin or blood lipid levels. However, it should be noted that at doses above 5 mg per day, HDL cholesterol levels (good cholesterol) fell below the standard reference value. However, these returned to normal after the drug was discontinued.

Other effects on testosterone levels

In reality, LGD-4033 causes a linear reduction in testosterone levels in all dosage ranges. The scientists claim that this reduction is not statistically relevant is inadvertently misleading. After all, this means that a person’s testosterone levels could have dropped from 800 ng/dl to 350 ng/dl. In this case, this massive drop in testosterone levels would have been ignored simply because the person would not have ended up in a clinical deficit (below 270ng / dl). However, these results are still significantly better than traditional anabolic androgenic steroids.

In addition, unlike most oral steroids, LGD-4033 is not methylated. Therefore, it does not have the liver toxicity that is typically present with methylated anabolic androgenic steroids. Confirmation of this was provided by an examination in which the scientists examined liver function both before the start of the study and after half of the study period. No significant change in liver function tests was found. Accordingly, this SARM can be used for longer periods without fear of liver disorders or liver damage.

Most men experience prostate enlargement and increased PSA at some point in life. If that’s under control, it’s not a big deal. However, it can get serious if things get out of control. Steroids contribute to this problem by docking with and activating receptors in the prostate. This promotes prostate hypertrophy and exacerbates any diseases or problems such as prostate cancer. Those who are older or who already have prostate problems will be happy to hear that LGD-4033 has no effect on PSA levels. The reason for this is the high degree of selectivity for the muscles towards the prostate and other organs and body systems.

Concluding this blog we are not promoting the use of any SARM, but reporting the facts that have been logged to date on its results. Primarily an LGD-4033 dosage has shown positivity and importance in having an anti-resorptive effect in the bones. This prevents the release of minerals back into the bloodstream and especially for osteoporosis. This could one day help many sufferers with this condition. If you are in the research chemical industry and searching for reputable companies with SARMs for sale check out Peptides USA. You will find a wide selection of peptides and products including lgd 4033 for sale at affordable prices!

LGD 4033 or Ligandrol is considered the strongest SARM for effective muscle growth. Ligandrol or LGD 4033 is not a member of the steroid family but instead is referred to as a selective androgen receptor modulator or SARM. This means it binds with the so-called androgen receptors of the bones and especially the skeletal muscle. Scientists have proven it has muscle-building benefits and can strengthen bones.  This means it is ideal for bodybuilding. LGD 4033 is effective as an alternative to a prohormone cycle. Research has shown that LGD-4033 can be far more effective than Ostarine. The SARM LGD 4033 capsules form an effective way to sustainably build muscle without disturbing or harmful side effects.

LGD 4033 capsules when taken continuously over a period of time greatly enhance the anabolic effects of testosterone with a reduction in androgenic side effects. Therefore, problems or typical side effects of known steroids are unlikely. Functionally, LGD-4033 selectively binds the androgen receptors. The anabolic activity in the muscle and in the bones is significantly intensified without negatively influencing prostate growth. Anabolic steroids of the past, however, were known to increase side effects, in these areas!

LGD capsules reveal their strength especially in building muscle. They do not have to be used exclusively in bodybuilding. Even with a diet, the SARM can be used as an advantage, as it has good anti-catabolic protection. In bodybuilding LGD 4033 is very effective because SARMs of this kind have a strong anabolic component and the ability to specifically build lean muscle mass. At the same time, LGD-4033 reduces body fat, allowing it to be used both in bodybuilding to build up mass and within a diet. The SARMs capsules can also be used to increase the strength only. Thus, the capsules allow an explicit intensive training at any time. Those who use LGD 4033 for muscle building should concentrate on a high-protein diet. A correspondingly high intake of protein is of enormous importance for fat reduction.

For more information on this SARM read here:https://www.usada.org/spirit-of-sport/education/5-things-to-know-about-lgd-4033/

Scientific studies have shown that in bodybuilding within three weeks the daily intake of only 1 mg of Ligandrol increased muscle build-up of about 1.5 kg of pure muscle mass. However, since dosages of up to 10 mg per day are taken in practice, the bodybuilding muscle buildup can be much more intense. Women, who do bodybuilding taking a daily dosage of 3 mg, have a clearly visible effect on muscle development. However, when taking capsules, women should always bear in mind that – in contrast to the example of Ostarine – residual androgen doses may be more noticeable. Researchers’ studies show that SARMs such as the LGD 4033 can be taken in combination with all other SARMs capsules. Suggested Dosage – Men should take two capsules daily of 5 mg per capsule each and women one capsule daily. The duration of the intake should be eight weeks.

PCT is recommended for the SARM LGD 4033

It is important after a cycle of Sarms LGD 4033 capsules a post-cycle therapy (PCT) is recommended. Although anabolic steroids significantly suppress the body’s own hormone production, compared to other SARMs this suppression of LGD 4033 is still much stronger. These circumstances make a PCT a necessary phase.

At glance advantages of LGD-4033 capsules