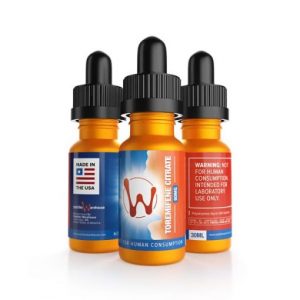 Are you searching for the SERM Toremifene for sale from a reputable company? Then you have found the right place. Peptides USA is an online store with a wide selection of quality Peptides and research SERMs for sale.  Toremifene Citrate is a research chemical that was originally developed as a cancer drug to help in the treatment of post-menopausal female breast cancer. Since then experts have found it to help benefit a number of other health conditions. Want to know more facts about his chemical then read on…

What is a SERM?

Toremifene is classed as a SERM or selective estrogen receptor modulator. It works by counteracting the effects of estrogen in the body.  The SERM Toremifene is classified as a triphenylethylene analog, the structure of which is very similar to Nolvadex (tamoxifen) and Clomid (clomiphene citrate). Toremifene (or Fareston) could be considered comparable to Nolvadex. Toremifene is also a non-steroidal compound.

Thie drug is classed as a breast cancer medicine in the treatment of post-menopausal female breast cancer. It is found to have a positive estrogen receptor (or an unknown estrogen receptor) and means that it is a drug used to block and treat female breast cancer.  This is enhanced by estrogen through the activity of estrogen at breast tissue receptors, which can promote cancer growth through the tissue growth-promoting activity in breast tissue. Toremifene binds to these receptor sites, as previously described. Then it blocks the ability of estrogen itself to further activate the receptor sites in breast tissue. Thereby blocking or stopping the progression of tumor growth that could be enhanced by estrogen.

What is Toremifene Citrate?

Licensed in the United States under the Fareston brand, toremifene citrate is approved for use in advanced FDA (metastatic) breast cancer. It is also being used to prevent prostate cancer under the brand name Acapodene.

This research chemical is also popular than anabolic steroids for bodybuilders and athletes for the same reasons as Nolvadex: it is used to combat and/or block the effects of excessive estrogen in the body due to the aromatization of various androgens used (such as testosterone or Dianabol). The SERM toremifene is mostly used to relieve and/or prevent the estrogen-related side effect of gynecomastia (development of breast tissue in men).

An Example of Toremifene Citrate Dosage

The recommended dose for the treatment of breast cancer is one 60 mg tablet administered once a day. Here are some other examples of how it is used:

Check out Peptides USA now and you will see it is the best place with toremifene for sale!

Follow us
Category: Articles
Tags: buy peptides us, toremifene fsh, toremifene reddit
Blog Search
Recent Posts
All products on this site are for In-Vitro Research, Development use only. Products are Not for Human consumption of any kind.