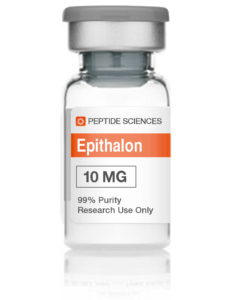 Epitalon experience starts here: The role of peptides in the functioning of the human body cannot be overestimated. These amino acid compounds perform a number of important functions. Natural peptides are involved in the regulation of digestion and muscle contractions. They also come in the form of neuropeptides for the brain and hormonal peptides to make the body function better. Currently, peptides are also used in aesthetic medicine to effectively rejuvenate the body. Here we look at the effect on the body and anti-aging with the research peptide Epitalon or Epithalon.

In the early 1960s, the American scientist Leonard Heiflick discovered an amazing fact. When cultured in a nutrient medium outside the body, normal human somatic cells can divide a limited number of times. The cells of newborns could go up to 80-90 divisions and the cells of the elderly – no more than 20-30 times. The maximum number of cell divisions is called the “Heiflick limit”. Scientists continued to study the reasons for such restrictions. Studies to date have found proteins play an important role in this process. Experts now know epithalon really is the peptide of youth, simply because it can slow down the aging process and reduce existing restrictions.

Epitalon Before and After Study

In 1971, Russian scientist Alexei Olovnikov found the reason for the limited number of divisions of normal somatic cells growing in vitro culture may be down to the gradual shortening of chromosome DNA after each was doubled. At the end of each chromosome of the somatic cells, there are multiple repetitions of the TTAGGG sequence, the total length of which can reach 10 thousand base pairs. Such repetitions, together with specific proteins, form telomeres, the end regions of chromosomes. It is these areas that are shortened during each division cycle.

The scientist also suggested that in the cells of the vegetatively propagated organisms, as well as the germ, stem, and embryonic cells, have a special biological mechanism for telomere repair. With these results today many scientists have high hopes for human stem cells.

In 1985, scientists discovered the enzyme telomerase. This has the special property of terminating the ends of linear DNA molecules on chromosomes with short repeating sequences in vertebrates, it is TTAGGG. This prevents the proliferation of chromosomes, which is the main cause of aging dividing cells. These cells include skin cells and fibroblasts, which synthesize elastin, collagen, and hyaluronic acid.

Later, in 2001, a special protein was discovered that binds to telomeres and actually blocks their access to the enzyme telomerase. In order to open access to the telomerase to telomeres, scientists from the St. Petersburg Research Institute of Bioregulation and Gerontology synthesized a youth peptide – epitalon.

The main functions of drugs containing peptides of youth

Two groups of youth peptides forming synergistic activity upon exposure are the basis of the V.E.C Multipeptide Concentrate. The geroprotective complex is represented by regulatory peptides epitalon, villon, thymogen, vesugen and carnosine. The main function of these peptides is to unite the nervous, endocrine and immune systems to work effectively within the body.

The peptides which are used effectively in the dermatological multi-peptide complex are:

Protein Elastin: why does our skin need it and how to fill its deficiency?

The use of epitalon peptides for youth promotes the active work of fibroblasts. This stimulates the protective properties of the skin. It improves the condition of blood vessels and the antioxidant system of the dermis and epidermis and contributes to the overall improvement of the skin. All this inevitably affects its appearance, contributing to a pronounced rejuvenation.

Epitalon experience summary means it can reduce the chance of age-related diseases and prolonging life! Of course, it is still being studied and is still classed as a research peptide.

Follow us
Category: Articles
Tags: epitalon and testosterone, epitalon dosage bodybuilding, epitalon forum, epitalon hair growth
Blog Search
Recent Posts
All products on this site are for In-Vitro Research, Development use only. Products are Not for Human consumption of any kind.