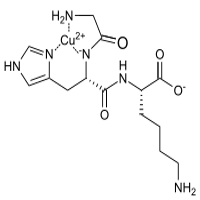 Our copper peptide review takes a brief look at what the hype is in the beauty world with this particular research peptide! Plus, how effective they are at reducing the aging process! The past few years have seen a notable interest in these research compounds from the cosmetic industry. You will have seen many famous actresses regularly advertise anti-aging creams with the miracle peptide ingredients in promising to reduce wrinkles! This then sparks interest from both skincare companies wanting a piece of the pie and of course us the customers! Who doesn’t want to look younger from using a copper peptide serum, gel, or cream rather than have Botox injections or expensive and invasive surgery? So here we discover more about these interesting ingredients…

What are Copper Peptides?

Copper peptides are groups of amino acids that are widely used. These peptides act as protective and anti-inflammatory agents that reduce the damage from oxidation after tissue injury. It also works as a remodeling agent for tissues that remove the damaged tissue and activate its replacement with a healthy one. Copper peptides have been around a while in the beauty world. They actually have the ability to revitalize skin and remove damaged tissue and regenerate a healthy one. Copper peptides improve the firmness of the skin and lower fine lines and wrinkles by boosting collagen production. Some users of copper peptide serums have seen lines disappear and smoother skin in as short as a month!

While this copper peptide review looks at the amazing results discovered using this particular peptide there are also some disadvantages. If a person overuses copper peptide they can cause skin irritations or more serious issues including organ system toxicity, sickness, and gastrointestinal problems.

Copper Peptides Before and After Results

In addition to promoting wound healing, copper peptides are profoundly used in cosmetics. They are mainly used in anti-aging products and hair growth. This is because they increase the production of collagen and help maintain healthy, firm skin. Copper peptides restore elastic fibers and the intermediate, which maintains the firmness of the skin, making it smoother and younger. Other benefits discovered from copper peptide research are they also have a strong anti-inflammatory effect and support the action of antioxidants. Because copper peptides restore the acidic protection of the skin, which is easily disturbed by salt and chlorinated water, they are very useful after bathing in the sea or pool. 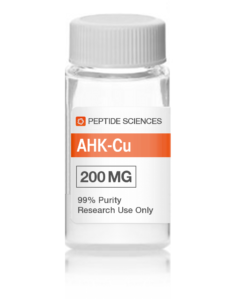 The effect of copper peptides on hair growth was discovered when scientists at the University of San Francisco’s Wound Treatment Center used copper peptides on the wounds of several patients. In addition to the wounds healing about 30% faster, significant stimulation of the follicular cells was also observed. A tripeptide complex even led to hair growth in the wound area. The discovery led scientists to try the same copper tripeptide complex on a patient who has been suffering from 90% alopecia (hair loss) for many years. After 6 months of application, she regained almost all her hair. Dr. Lauren Picart, a leading expert in copper peptide technology, compared the action of peptides with protein injection.

The following tests were performed in chemotherapy and grafted patients and again showed the success of copper peptides in stimulating and healing the hair follicles. Studies from universities and research institutes show that copper peptides improve hair grafting success, increase the size of hair bulbs, stimulate hair growth, and reduce hair loss. They fight the degenerative problems of the hair (and the skin) and thus stimulate and strengthen the hair follicles. Their action even compares to that of minoxidil, which is known as the most effective ingredient that causes hair growth.

There is nothing ordinary about copper peptides; this ingredient has shown excellent results in lowering lines and wrinkles. But, why is the copper peptide so expensive? Simple it is the ingredients! To preserve the skin’s DNA the blend of ingredients has to keep skin safe and protected for the safest results. While we can’t disclose the manufacturers’ patented contents we can recommend reliable suppliers of this research peptide and more like this. So, if you are in the research industry and want the best place to buy peptides check out Peptide Sciences.