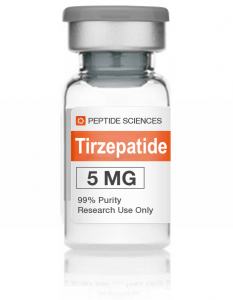 Tirzepatide for Weight Loss: Tirzepatide is marketed under the brand name Mounjaro. It is a drug approved in the US for treating type 2 diabetes. However, the studies currently being carried out promising offer results also in the treatment of obesity.

Studies show some patients able to lose weight lose an average of 20% body weight. It shows the results of the SURMOUNT-1 clinical trial, carried out in the USA and recently published in the scientific journal The New England Journal of Medicine. In more detail, according to the study, treatment with high doses of tirzepatide (about 15 mg weekly) would cause them to lose about 22.5% of their body weight.

“The study that is already in phase III of safety and efficacy for the treatment of obesity, indicates that, effectively, it could reduce an average of up to 20% of body weight in some patients”. States Dr Albert Lecube, Vice President of the Spanish Society for the Study of Obesity (SEEDO) and Head of Endocrinology at the Arnau de Vilanova University Hospital (Lleida).

“It is better to express it as a percentage of weight loss because if you weigh 200 kilos with the drug, you still lose 40 kilos; or if you have 80 kilos, you still lose 10. That is to say, it does not mean that everyone who takes it -speaking in a way every day- will stay in the bones. By doing the treatment well, you will lose between 20-25 kilos, on average. However, there will possibly continue to be people who will lose more and others less”, clarifies the expert.

How Does Tirzepatide Work for Weight Loss?

This drug would have a double action against obesity. As the doctor explains, it acts against satiety signals, reducing appetite. The GLP-1 peptide (like other medications indicated for obesity such as Saxenda or Wegovy already did, the latter approved only in the US) activates another component called GIP that could imply body fat regulation. “This synergy would make it more powerful, and therefore, the body would be able to lose much more weight,” he says.

If this drug is for treating obesity, it will join other medical therapies such as Saxenda. Saxenda is the most effective medication available in Spain, from which some patients with obesity have benefited since 2016. Likewise, Saxenda shares the same active ingredient (liraglutide) for treating type 2 diabetes, but with different doses and indications. Once again, it proves that a drug against type 2 diabetes also has benefits in treating obesity. In this case, the active ingredient would be tirzepatide.

However, according to the published results, Tirzepatide would be even more effective than Saxenda. In addition, it would also be an injectable medication, in this case weekly; that is, one puncture a week would suffice. Saxenda application is one injectable per day.

Also, the indications for this drug would be the same as for Saxenda. Especially for patients with a BMI above 30 or above 27.5 with pathologies associated with excess weight, such as
-hypertension
-diabetes.

However, it is essential to remember that the approach to obesity must always be comprehensive. Not only is it enough to take the drug, and that’s it, but there must also be -and significant- changes in lifestyle in terms of diet and physical exercise.
“Obesity is a metabolic, chronic disease that requires a commitment on the part of the patient in terms of lifestyle. It is key to do physical exercise regularly and eat a diet that is as healthy and balanced as possible. Weight loss will be greater if you accompany the drug with diet and exercise,” he says.

Tirzepatide will not be financed against obesity. However, Tirzepatide will soon be available in Spain for treating type 2 diabetes. “probably early next year,” says Lecube, and it will be financed, as is the case with all diabetes drugs.

When Will Tirzepatide be Available?

Ultimately, if it is approved for obesity, it would not be financed by the public health system. The same is with Saxenda because obesity in Spain and other countries is not yet recognized as a chronic disease. Therefore, “patients with obesity should know that they would have to pay for it themselves,” laments the expert.

According to data published by SEEDO, 53.8 % of the Spanish population is overweight, with obesity corresponding to 17.2%. For this reason, the expert insists, it is essential that obesity is recognized for what is a chronic disease. It is also a risk factor for many diseases, including cardiovascular diseases, the leading cause of death today in Europe. Obesity is also a risk factor for other conditions such as sleep apnea.

So “treating obesity, all associated diseases would be improved, and there would also be a reduction and economic savings,” explains the doctor. And it is something that entities like SEEDO are fighting for.

Last February, this scientific society called for the disease to be recognized as obesity: “This must be the next step to the development of a National Plan aimed at its prevention as well as its correct diagnosis and treatment. Therefore, it is necessary to start financing pharmacological treatment and incorporate professionals from the field of Human Nutrition into multidisciplinary healthcare teams.”

Let’s not forget that obesity is a multi-causal disease in which many factors intervene:
-biological
-genetic
-social
These must address comprehensively. For this reason, “we are fighting for it to be recognized as a disease to give way to treatments that can finance and the patient does not have to pay out of pocket,”

Follow us
Category: Articles
Tags: tirzepatide fda approval, tirzepatide weight loss trial
Blog Search
Recent Posts
All products on this site are for In-Vitro Research, Development use only. Products are Not for Human consumption of any kind.